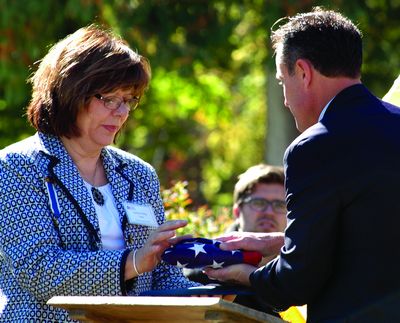 Four years after its grounds and buildings sat in near-ruins, the Schoharie Chapter of the NSDAR celebrated history, veterans, and a new American flag Sunday at its Day of Service program.
Nearly 100 people attended the event at Lasell Hall, rebuilt and renovated since Hurricane Irene.
Front and center of the celebration was a flag raising by members of the Schoharie County American Legion Honor Guard and the 2nd Regiment, Albany County Militia (1775), marking the first time the American flag had flown there since Irene.
As veterans from a handful of conflicts and their families watched, the two also raised a commemorative flag marking the 50th anniversary of the Vietnam War.
"It means a lot to mark this day and all it means with all of you," Chapter Regent Carolyn Richter told the crowd.
Assemblyman Pete Lopez was on hand to present Ms. Richter with an American flag that had flown over the State Capital.
Sharon Aitchison, a founding member of the Schoharie County Barn Quilt Square Trail, and Chris Osinski, Chapter registrar, explained some of the history behind the Revolutionary Spirit barn quilt square that now hangs on Lasell Hall.
"We weren't sure we'd ever be be able to open our doors again," Ms. Osinski said, remembering the devastation of Irene.
"What better way to honor the people who helped us come back," than the quilt square, won by a couple of different DAR members in two different raffles before being donated to the Schoharie Chapter.
Jennifer Schultz, Chapter vice-regent, then spooke about a project she's spearheading that kicked off Sunday and continues indefinitely, the Veterans History Project.
Vets are invited to participate in the Veterans History Project by recording their personal stories for future generations.
The first interviews were held Sunday and Schoharie DAR members will travel to those who can't get to them.
"The true cost of war isn't measured in dollars and cents, but in lives," Ms. Schultz said.
Interviews will be preserved within the permanent collection of the United States Library of Congress.
For more information on the project or to participate, contact the SchoharieChapterNSDAR@gmail.com or call 868-5131.