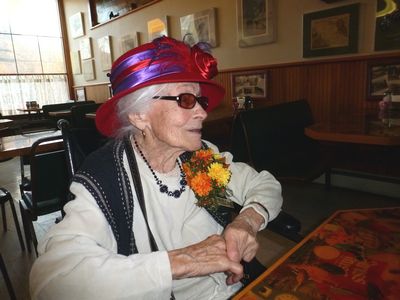 Shirley Skinner of Worcester will hit a big milestone this Saturday, October 17, when she celebrates her 100th birthday.
A prolific writer, Mrs. Skinner sends out cards and letters weekly, regularly sharing clippings from the Times-Journal with family and friends around the world and even writing to President Barack Obama.
Part of her letter to President Obama:
"...The first President I voted for was President Franklin Roosevelt. The Democratic representative in my area of New York was Clint Doolittle, which I believe was in 1933.
"In high school, I won a trip to Washington, DC to meet President Hoover. I had written an essay on President George Washington and came in second.
"Shirley, back then, was considered a boy name and they thought I was a boy, so when it came time to figure out lodging in Washington, DC there was some confusion. People used to think I was named after Shirley Temple, but I was before her!
"I remember Mr. Hoover coming out to greet us winners from Upstate New York and pose for a picture, but he didn't think much of us, and didn't really smile or care about our names.
"Mr. President, I am so happy to see how you treat young people-ypu really smile and look at people. It's important. I voted for Roosevelt instead of Hoover when I became voting age.
"Also, I am very glad that Mrs. Mochelle Obama has a garden. I come from a long line of farmers in Upstate New York, and it's important for people to know how to grow their own food. I eat as organically as possible."
Mrs. Skinner is a 72-year member of the DAR and is also active in the Worcester Grange, Women's Club, and Historical Society.
She grew up going to a one-room schoolhouse and got there by horse and buckboard and learned to drive on a Model-T Ford.
She always wanted to travel and trace the roots of her French Huguenot ancestors, and traveled to Europe several times by ocean liner, including on the maiden voyage of the Andrea Doria, sipping a brandy to ward off seasickness.
The next two times she flew and was granted a certificate as one of the first to fly over the Swiss Alps.