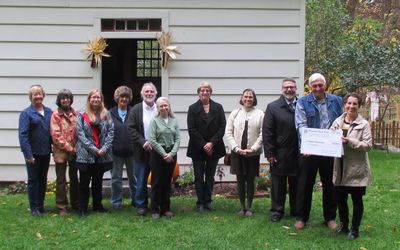 The Preservation League of New York State last week awarded the Village of Schoharie a $10,000 grant to support the cost of a reconnaissance level survey of historic structures.
The presentation took place in front of the Palatine House Museum in the village, the oldest building in Schoharie County, built in 1743 as a residence and parsonage of the Lutheran minister.
Schoharie was not incorporated as a village until the year 1819, but the history of the area goes back to the early 18th century. The buildings within the village reflect this history, dating from the early 1700s to the late 20th century. The area suffered devastating flooding during Hurricane Irene in 2011; many Main Street businesses were damaged and homes evacuated. Four years later, the community continues to show resiliency and pride in its history and architecture as it recovers from the flood.
This survey project closely aligns with the Village's strategic plan and economic development programs. The eventual creation of a National Register Historic District will allow residents to take advantage of the NYS and Federal Rehabilitation Tax Credits. Jessie Ravage of Cooperstown will complete the project.
"This grant from the Preservation League could not come at a more opportune time," said Village Mayor John Borst.
"The survey project dovetails perfectly with the goals of our Long Term Community Recovery (LTCR) strategy. Formally documenting historic structures in the village will help us preserve, protect and enhance the historic heritage of Schoharie and will support the promotional aspects of our economic development plan. This is another opportunity to help make post-flood Schoharie an even better place to live."
The Preserve New York Grant Program is made possible by the New York State Council on the Arts with the support of Governor Andrew Cuomo and the New York State Legislature.
"With the announcement of the 2015 awards, the total support provided by Preserve New York since its launch in 1993 is just over $2 million to 320 projects statewide," said Jay DiLorenzo, President of the Preservation League. "Preserve New York has a strong track record of bolstering local preservation efforts and delivering a strong return on investment."
"At its August 2015 meeting, the Preserve New York grant program panel selected 14 applicants in 11 counties around the state to share $114,990 in funding," said Erin Tobin, the League's Director of Preservation.
"As always, the competition for these funds was intense. The Preservation League is delighted to help advance the preservation efforts of the Village of Schoharie with timely funding from Preserve New York."