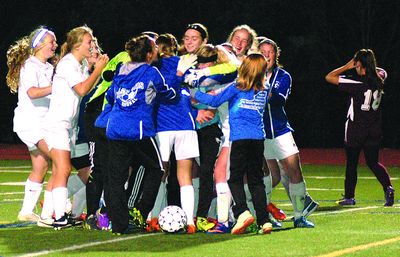 The Schoharie girls are once again heading to the Class C final four.
On the strength of two overtime victories last week, the Indians have advanced to the state semi-final game Saturday in Cortland.
The Indians, the Section II Class C co-champions, will play Elmira of Section IV on Saturday at 2:30pm at Cortland High School in the state Class C semi-final.
The winner of that game will play in the Class C state championship on Sunday at 9:30am at SUNY Cortland.
Schoharie advanced to the state semi-finals by beating Greenville in a shootout Wednesday evening in Stillwater and then downing Section X's Potsdam 1-0 in overtime in Ogdensburg on Saturday in the state regional.
After a scoreless regular session, McKenzie Phelan, a senior, scored off a corner kick by Megan Krohn with 7:30 left in the second overtime.
The Indians outshot Potsdam 20-2. SCS goalie Desiree Palmatier ended the game with two saves.
The Indians advanced to 18-1-1 with the victory.
It was a long day for the team.
They left at 6am and did not return until around 11pm, but it was worth it, co-Coach Scofield said.
On Wednesday, Schoharie advanced to the state regionals by winning a shootout 8-7 over Greenville. Both teams were crowned as co-champions since the game ended in a 0-0 tie after two 10-minute overtime sessions and two five-minute sudden victory periods.
In the first shootout session, each team had three players that scored.
They then advanced to a sudden victory shootout in which one player from each team took a shot.
Maddie Phelan, Alexis Bleau, and Bryan MacDonald all scored for the Indians and were matched by three players from Greenville.
Next up was eighth grader McKenzie Barton, who was up from the JV squad. She put the ball past the Greenville goalie and it was all left to Palmatier.
The senior batted away the next shot sending the Indians to the states. After stopping the shot, Palmatier raced out to the middle of the field and was mobbed by happy teammates.
"That was an exciting game," said Coach Scofield. "Being co-champions with them is not a bad thing."
The Indians, he added, have been practicing penalty kicks for "quite a while and McKenzie makes them pretty regularly and she was in the second group."
The Indians fell to Lansing in the state regionals last November.
Coach Scofield recalled that the game was supposed to start at 5pm and was delayed to around 7pm because of an injury in the first game of the day. The Indians spent nearly four hours on the bus waiting to get on the field.
This year, the Indians play in the first game of the day.
The Indians are the only team to be returning from last year's final four and with their experience from last year, should be a little less nervous this time around.
"Tammy (co-Coach Tammy Drinon) and I are looking forward to the challenge with the girls," Coach Scofield said.
"When you get to this point of the season, you have to be ready for anything.
Elmira-Notre Dame downed Sauquoit Valley in the state regionals. Sauquoit Valley was ranked number one in the state and had beaten Schoharie 3-0 in a tournament earlier this season. The number two ranked team in the state also lost.
The Indians were ranked third in the state.