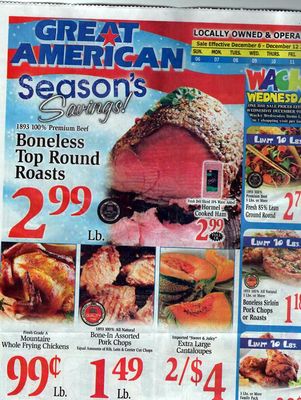 For the first time since Hurricane Irene devastated Schoharie County in August 2011, the Schoharie Valley should be home to a supermarket.
Developers Carver Laraway and Jim Becker told Middleburgh Village Board members about plans for a 15,000-square-foot Great American to be built off of Route 30, across from the old Grand Union store that was flooded in 2011. The new store will share the same entrances as the Valley Pharmacy.
Hopes are to break ground in March and the store to be open by the summer, Mr. Laraway announced.
"We want the grocery store to be open by July of next year," he said.
More details about the grocery store, as well as the proposal for up to 60 nearby townhouses, will be discussed at a village workshop meeting at 7pm Monday at the firehouse.
The proposal will go to the planning board in January.
The former Grand Union, according to Mr. Laraway, was about 8,500 to 9,000 square feet and brought in $3 to $3.5 million per year.
For comparison, the Hannaford store in Esperance totals about 18,000-square-feet, Mr. Laraway added.
The new store, which will be operated by the owner of the Great American store in Prattsville, will be built on land formerly owned by Henry Doerge that once housed the Middleburgh Little League fields.
The entire project, the store and the townhouses, will be in the village.
Developers are hoping for a 10-year payment in lieu of taxes, at least for the grocery store.
Even with the PILOT, the property tax revenue will be much more than is currently raised, according to Mr. Laraway.
The plans have been in the works for more than three years, Mr. Becker told village board members.
"We thought it makes sense and we're willing to put our money where our mouth is," Mr. Laraway said.
Village officials were pleased with the announcement.
"I'm sure this one will do quite well," Trustee Bob Tinker said of the proposed store.
"This is exactly what our community needs. I have been impressed by the community spirit of the developers," added Mayor Matthew Avitabile.
The townhouses are an important part of the project, Mr. Laraway stressed.
"It's aggressive but it has to be a package," Mr. Laraway noted.
"The grocery store can't stand alone."
He described the townhouses as "maintenance-free living." Each unit will have a garage and a storage unit. Plans are to have 15 townhouses in all with four units in each. There would also be a 50-by-70-foot community center and gym on the site for residents of the complex.
The townhouses would be constructed on a "build as they come basis," according to Mr. Becker.
The look of the store and the townhouses will be important, both Mr. Laraway and Mr. Becker told board members.
All the buildings will be designed to blend in and there will be period lighting, Mr. Laraway added.
The townhouses will be built on slabs and all the buildings will have to be raised slightly to stay out of the flood plain. The entire complex will total about 14 acres.
An important feature of the development will be the construction of a new, 24-foot wide street off of Middlefort Road.
The former River Implement building is to be taken down; the roof may be used for the new community center/gym if it is structurally sound.
The new street would start at the entrance of the River Implement parking lot and would end at the new store. The new townhouses would be built on either side of the street. A sidewalk would be built on the new street up to the store.
The plans are still being modified and it is "still a work in progress," Mr. Becker noted.
The developers are hoping for public input on the plans.
"I'd love to have the input of every person," Mr. Laraway said.