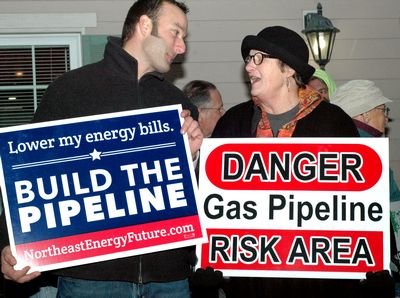 Josh Shaul and Jeannette Rice stand on different sides of the gas pipeline issue.
But at events like last Tuesday's protest against the Northeast Energy Direct Project-the NED--proposed by Tennessee Gas subsidiary Kinder Morgan, they usually end up side-by-side.
Holding a sign, "Lower my energy bills. Build The Pipeline," Mr. Shaul, who lives in Middleburgh and is a member of the Laborers Local 157 Laborers Union, civilly debated solar, fossil fuels, and fracking with Ms. Rice, who's from Rensselaerville and whose sign read "Danger Gas Pipeline Risk Area."
They think they met about a year-and-a-half ago at a similar event and try to stand together when they can to continue their debate.
Mr. Shaul supports the NED because of the jobs it will mean.
He also sees it as a way to get the country away from oil and coal until the solar that Ms. Rice backs is more sustainable.
Ms. Rice wants Mr. Shaul and others like him to have good jobs so they can support their families.
But she also wants a clean, safe environment for those families to live in, she said.
Ms. Shaul and Ms. Rice have agreed to disagree-even as each continues trying to convert the other.
Though at first it seemed like their exchange might set the tone Tuesday, the event broke down along familiar lines after a brightly-lit union truck blasting "This Land is Your Land," briefly drowned out remarks by opponents.
"You'll get your chance," a protestor shouted to Local 157 Media Relations Director Frank Marchese as he approached the crowd.
"Yeah, but you'll take a whole hour. We only need 10 minutes," Mr. Marchese answered back.
Speaking with media afterwards, Mr. Marchese said opponents can't have it both ways-contributing to the federal regulatory process and then backing away from it "when they don’t get their way."
"I see the same 50 people at all of these things," he said.
"This pipeline will be built by union members so they can support their families. It's not about fracking-it's about gas infrastructure and it's absolutely going to bring down energy costs."
Inside the Days Inn, Tennessee Gas representatives met one-on-one with landowners.
Outside, the focus was on the proposed project's cost to the environment on its impact on historical sites.
"The Constitution Pipeline is in the Governor's hands," said Kenneth Chue, of Otsego 2000, said of the still-pending DEC water quality decision that allow the project to finally move forward.
"He could lead us in a better direction."
Because they're sharing the same path, Mr. Chue also argued for Constitution and the NED pipelines to be evaluated together.
Kanaraahtiio Roger Jock, Roger, a member of the Mohawk Bear Clan, agreed that regulatory agencies like DEC and FERC need to look at the bigger picture when it comes to stewardship of the land and future generations.
"What's happened in Pennsylvania [with fracking] is going to spill over onto our lands as well," he said. "These pipelines equal the destruction of things. We ain't going to be able to live here without water."
Mr. Jock said he's been a union ironworker and though there have been times when he's worked on projects and didn't realize the destruction they'd cause, the consequences of the NED and Constitution Pipelines are clear now.
"How is a pipe in the ground going to help people?" he asked.
Mr. O'Connor argued that the pipelines could destroy hundreds of years of significant cultural and archaeological history, coming within a quarter-mile of the 1,000-year-old Pethick site and likely burial grounds along the Schoharie Creek.
"We don't know what's there," he said, in part because Constitution's archaeological findings there are being kept secret.
With the necessary approvals, Constitution could break ground in the spring and the NED by November 2018.