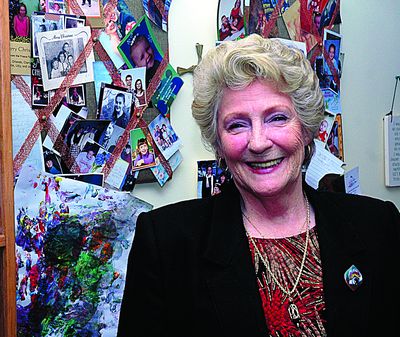 Lending a hand to almost every cause and non-profit, Donna Lavigne takes good care of Schoharie County.


And for a lifetime of good deeds, Ms. Lavigne is the Times-Journal Star for 2015.


"Donna is generous almost beyond belief," said T-J Editor Patsy Nicosia. "I don't know where all of us would be without her."


Ms. Lavigne is generous not only with money, but with her time. She was a founding member of Cobleskill Partnership Inc. in 1997 and was later the downtown organization's president.


She was also an early supporter and longtime co-chair of Marathon for a Better Life, which helps Schoharie County cancer patients and their families.


Now Ms. Lavigne, 69, is a board member for the Iroquois Indian Museum in Howes Cave.


Ms. Lavigne was a kind contributor to CPI, the Marathon and Indian Museum, but she's also given to numerous other causes, too: the Old Stone Fort, Literacy Volunteers, parades in Cobleskill, causes for children and many others.


As a successful business owner with The Donna Lavigne Agency, Ms. Lavigne explained that now she has the means to help.


"As a business person, everyone comes knocking at your door, but when I started out, I didn't have much money," she said.


"I've had a modicum of success, so I could start paying it back. I owe this to the community."


She also believes that non-profits are part of Schoharie County's fiber. Without them, the county would be a lesser place, she said.


"The things we have, like the Old Stone Fort and Indian Museum, have to be able to operate," she said. "They're running on a wish and a prayer.


"They contribute to our community and they need support."


Being in business more than 30 years, Ms. Lavigne has seen small businesses being replaced by corporate entities and chains.


In general, she said, the newcomers are less likely to help, leaving more responsibility on the remaining small businesses to contribute.


"Corporations are not our hometown folks," Ms. Lavigne said. "They don't have skin in the game, man."


That's why she tries to encourage other small businesses and individuals to contribute, too.


"If you want to keep what we have and see, write a check, whether it's to CPI, Catholic Charities, whatever," she said. "We need them."


Ms. Lavigne's career of giving hasn't been all sunshine. She suffered a heart attack in the early 1990s and a few years ago, battled breast cancer.


It was only a few months before she was diagnosed with cancer that Ms. Lavigne stepped away from CPI and the Marathon.


"I think I needed my energy to fight that," Ms. Lavigne said, adding that she needed a break.


Despite the setbacks, Ms. Lavigne looks back at her good will with satisfaction tinged with humor.


"I'm an Irish Catholic co-dependent," she said, laughing. "My job is to take care of the world, so hold still while I take care of you."

More Star stories are in this week's paper edition.