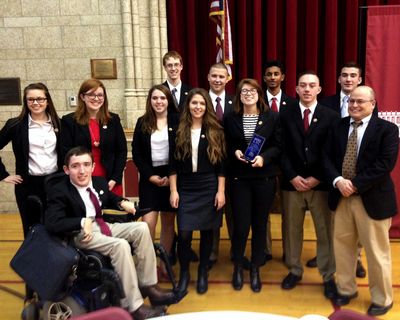 New Visions students win 2016 "We The People" competition
For the fifth time, students in the Capital Region BOCES Career and Technical School and Questar III New Visions Law & Government program will compete at the state "We The People: The Citizen and the Constitution" competition.
The 11-student NVLG team advanced to the February 27 state competition after besting their peers from around the region in a local competition hosted by Albany Law School on January 9.
The winning NVLG student team consists of:
--Gabrielle Agostino, Mohon- asen Central School District,
--Mutaz Ali, Troy City School District,
--Morgan Daignault, Sharon Springs Central School District,
--Katie Gibson, Ichabod Crane Central School District,
--Kyle Hurysz, Maple Hill Central School District,
--Keenan Loder, Cobleskill-Richmondville Central School District,
--Margaret Richards, Ichabod Crane Central School District,
--Julian Schlemmer, Troy City School District,
--Mathilda Scott, Cobleskill-Richmondville Central School District,
--Daniel Sonthivongnorath, Scotia-Glenville Central School District,
--Alex Wilgocki, Mohonasen Central School District.
To win, the New Visions Law & Government students had to explain the philosophical and historical foundations on which the American political system is based.
"The New Visions Law & Government students prepared for the competition, in part, by studying 'We The People: The Citizen and Constitution,' an intensive curriculum focusing on the Constitution and the Bill of Rights," said attorney Rich Bader, who teaches the class.
Last year, New Visions Law & Government students won the event's New York state finals and went on to win an award at the national competition.
The NVLG program and its "We The People" win drew praise from Bruce Tryon, school board president at Cobleskill-Richmondville, and Pat Green, superintendent in Sharon Springs, both of whom have students attending.
"The Board of Education commends and is exceedingly proud of both Mathilda Scott and Keenan Loder and wish them well in the state competition," Mr. Tryon said.
"The investment C-RCS has made for students like them to engage in curriculums and competitions like this benefits all of us."
Mr. Green shared many of the same thoughts and congratulated senior Morgan Daignault.
"SSCS has long recognized the value in providing students the opportunity to participate in and benefit from VOTEC and New Visions programs," he said.
"Both paths provide hands-on experiences in the student's career path of choice. Advanced competitions such as "We The People," gives these students the platform to actively apply what they have learned in a more high-stakes setting."
The program is funded and run in New York by the New York State Bar Association's Law Youth and Citizenship program since 2010, when Congress cut its funding. The program has benefited 30 million students nationally during its 29-year history.
NVLG is a career-exploration and honors Advanced Placement (AP) and college credit-granting program offered by the Capital Region BOCES Career & Technical School for honors-level, college-bound high school seniors. Participating students attend the program for a half day and their home high schools the other half of the school day.
In a classroom located at the State Education Department building in downtown Albany, NVLG pupils study an integrated curriculum of advanced coursework in political science, law, English and economics, with government and law-related internships, job shadowing, field trips, community service and competitions. Students learn first-hand about the executive, legislative and judicial branches of government, as well as about the private legal sector.
NVLG is accepting applications through March 18 for the 2016-17 school year.
An open house for the program will be conducted on February 10 from 8:30-10:30am at the Capital Region Career and Technical Education Center, building B, 1015 Watervliet-Shaker Rd., Colonie. For more information, call 486-2613.
An evening open house for all New Visions programs will be held at the same location from 6:30-8pm on March 2.