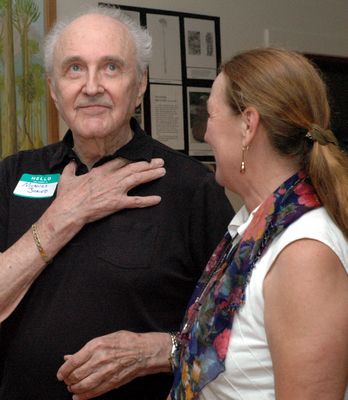 It must be something in the water.
That's what the t-shirts said Friday when the Gilboa Historical Society thanked dozens of supporters at a celebration marking the completion of the Gilboa History Center.
The something in the water part was certainly true for the guest of honor, 1947 Gilboa Central School graduate Nick Juried, who funded the addition to the Gilboa Museum and was overwhelmed to see it had been named in his honor.
Mr. Juried, 86, a retired sales executive who now lives in Austin, Texas, fought back tears as he talked about his longstanding ties to Gilboa.
"I never left Gilboa and Gilboa never left me," he said, "but this recognition-my name of the sign, the plaque...I never expected it.
"I did well in investments. I saw a need and I had the ability to help. I love history and I will always be a part of Gilboa."
The Gilboa Museum, the former town hall, was moved to its Stryker Road site by Highway Superintendent Lester Parker after the 1996 flood.
Ten years later, Mr. Parker was one of those on hand Friday.
His construction business, Parker Way, handled much of the exterior work for the project and he said he was thrilled by what he saw.
"Really? When we moved it, I thought it would just be an interesting old building sitting here," he said. "I never expected it to come to look like this inside."
Longtime Gilboa resident Mike Morkaut and his firm designed the addition and supervised construction, which began last October and continued over the winter, finishing ahead of schedule in May.
Interior work was done by Tait General Contracting and as part of that job, Rich Tait said, the interior of the older Gilboa Museum was sheetrocked and the basement was finished-something that will allow for future expansion.
"Nick really stepped up to the plate on this," Mr. Tait said. "It was a wonderful project to be a part of and I think his enthusiasm really caught on with everyone here."
The Gilboa Museum features the town's world-famous fossils, along with paintings of them by local artist and volunteer Kristen Wyckoff and a Children's Activity Center for exploring the town's prehistoric past.
New, millions of years-old fossils are constantly turning up and for all of its destruction, Hurricane Lee was a godsend in that respect, Ms. Wyckoff said.
The new Nick Juried History Center focuses on Gilboa's more recent past and in addition to a small schoolroom recreated with relics from the Fork in the Road school in South Gilboa, features photos and displays of: Lifestyles, Neighbors, The Reservoir, and Gilboa Village before the town was flooded by New York City in 1926.
Ellen Thorn and her husband, Jerry Stoner, are among those who worked on those exhibits, gathering ideas on their visits to other museums to apply at home.
"Plus, we volunteer as docents here, so we know what questions people tend to ask," Ms. Thorn explained.
On the walls, poster-sized scenes show Gilboa as a typical 1900s community; alongside them is an album of starker photos put together by Mr. Stoner of the front and back of every home taken by NYC for insurance purposes before they were destroyed for the reservoir.
The idea for the Nick Juried History Center began just a year ago, said Dottie Pickett, the mover and shaker behind it.
"Nick is really appreciative of all that Gilboa did for him," Ms. Pickett said. "It was just a natural fit to get him involved with the museum. He's become a good friend and a good friend to Gilboa."
Though looking through the museum, it might seem like Gilboa's real strength is in its past, that if it hadn't been flooded to provide drinking water for New York City it might just be one more, run-down town, Ms. Pickett said nothing could be farther from the truth.
"Everyone here had phones when that wasn't the case anywhere else," she said. "Gilboa had its own hydroelectric plant...
"In the 1850, the population was 3,000. We had a hippodrome..." a movie theater, where, likely, "The Spirit of USA," a silent movie shot in Gilboa and uncovered by Lee Hudson, another museum volunteer, was shown.
"If Gilboa hadn't been flooded, we'd be bigger than Cobleskill and Oneonta combined."
More than 400 people turned out for the history center's official opening Sunday, when in a surprise kept secret by Ms. Pickett since May, Mr. Juried was presented with an Otsego/Schoharie 2000 Historic Preservation advocate award.
The Gilboa Museum and Nick Juried History Center is open Saturday and Sundays through Labor Day and Columbus Day Weekend.
For more information, call (607) 588-9413.