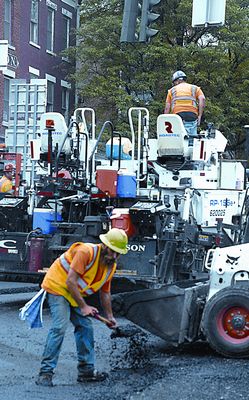 Drivers who dreaded coming to Cobleskill can ease their fears because the Main Street project is nearing completion.
Although there's still work to do, contractors applied a second, or binding, coat of blacktop on the street early this week.
It marked the almost-finished phase of the project that started in late April to replace aged water and sewer lines between Grand and North streets.
Necessary as the project was, it plagued downtown businesses with dust and caused drivers to avoid the rugged road.
In a frenzied effort on Friday, contractors applied the first coat of blacktop at the intersection of Main and Grand streets.
"We had a goal to have that part done by Fair time, and we made it," said Ken Armlin, superintendent for contractor August Bohl.
"He's been doing a good job, bringing in extra crews and starting early in the morning to get it done," said Mayor Linda Holmes.
Not all of Main is paved. Still to do is the stretch between Center and North streets.
Having the central part of the paving done pleased merchants who saw customers flee because of the dust from the torn-up street. Many said business was a fraction of what it normally is in May, June and July.
"It's nice to have it done so that people can park on Main Street again," said Jacqui Hauser, executive director of Cobleskill Partnership Inc., the village advocacy group.
"And it's great to have the dust under control," she added, referring to the central business section.
The dust is still a sore point with Mayor Holmes. She said the village will hold a meeting of department heads to see what can be done to clean buildings along Main Street.
"I'm still disappointed with the cleanup," she said. "That was part of the contract."
Working in the dust was a problem for Mr. Armlin's crews, too, although he said it was unavoidable.
"Every time we tore it up, there was more dust," he said. "But we had to do it.
"We had to make a mess to get it done."
Curb and sidewalk work still needs to be completed over the next week or so, Mr. Armlin said.
Also, the state Department of Transportation is paying for under-drainage lines near Zion Lutheran Church.
Those lines will draw water off Main Street and into a basin by the church.
"We've had a problem with water and ice on the street from Union to North, and that will take care of it," Mayor Holmes said.
More paving will be coming in late summer. Mayor Holmes said DOT will pave from Stewart's to Center Street, putting down a layer of pavement on top of what was applied this week.
In the spring DOT will pave from Center Street to Wal-Mart, Mayor Holmes said.
Downtown suffered during the project, she said, but the end result will be beneficial.
"Although there were some rough patches, dirt and dust, unfortunately, it will be good when it's finally done," Mayor Holmes said.